Historic Churches of Buckinghamshire is a project launched in 2018, with only a few churches included at the moment. 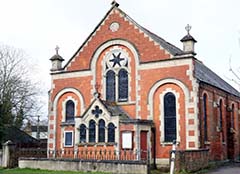 Its original interior layout is rather vague now, we would be delighted to have (and be able to show) any early photographs of the interior.

An Illustrated Article about the Methodist Chapel, Stokenchurch - Page 1 of 1

Primitive Methodists often started meeting in their own homes, or borrowed larger premises, and then built themselves small Chapels. That was the case at Stokenchurch, where they laid the foundation stone for their first Chapel on 2nd September 1862, which was behind the "Royal Oak" and close to the Parish Church.

However, 30 years later that building was recognised as inadequate and a larger Chapel was needed, so fund-raising began with a procession and bazaar in June 1892. A piece of land was purchased at auction for £235 by Mr William Britnell. On 7th February 1896 tenders were invited for building a new Primitive Methodist Chapel and Schoolroom. On 28th February it was announced that 9 tenders had been received from builders in Oxford, Henley, Dorchester, Abingdon, Lane End, Aylesbury and Stokenchurch. They ranged from £1,979 down to £915 from Mr George Syred of Stokenchurch, whose tender was accepted. In late April 1896 a ceremony was held for the laying of foundation stones, including those below.

Stones around the front of many Methodist Churches and Chapels record the names of donors to the original building funds, sometimes it even possible possible to guess the size of donations made. This Chapel was no exception, about half of the stones are shown below.

The large corner stone on the left is inscribed: "THIS STONE WAS LAID ON BEHALF OF THE P.M.CHOIR BY MR W. BRITNELL". To the right are seven stones carved with the surnames of various donors. They seem to mostly be the people who donated over £2. 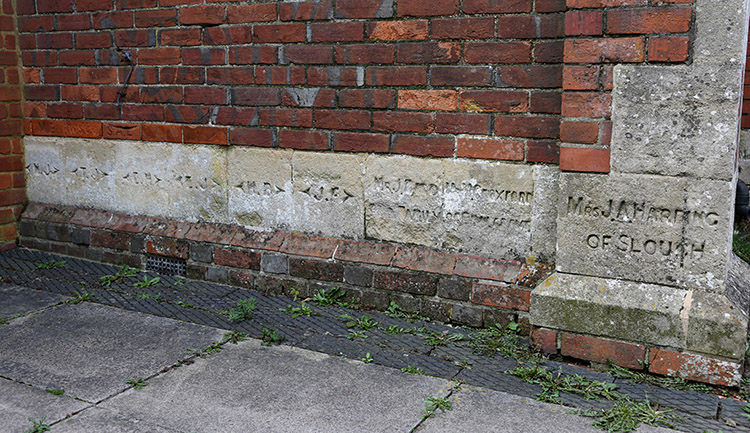 On the right here are more surnames, but on the left the donors only get their initials recorded. They seem to mostly be the people who donated under £2.

The ceremony of laying the foundation stones, which was followed by tea for 300 people in a marquee, was reported (with exact details of who gave how much money) in the South Bucks Standard newspaper of 1st May 1896. Amazingly, less than 6 months later, on 23 October 1896, the same newspaper was reporting on the "Opening of New Primitive Methodist Chapel". 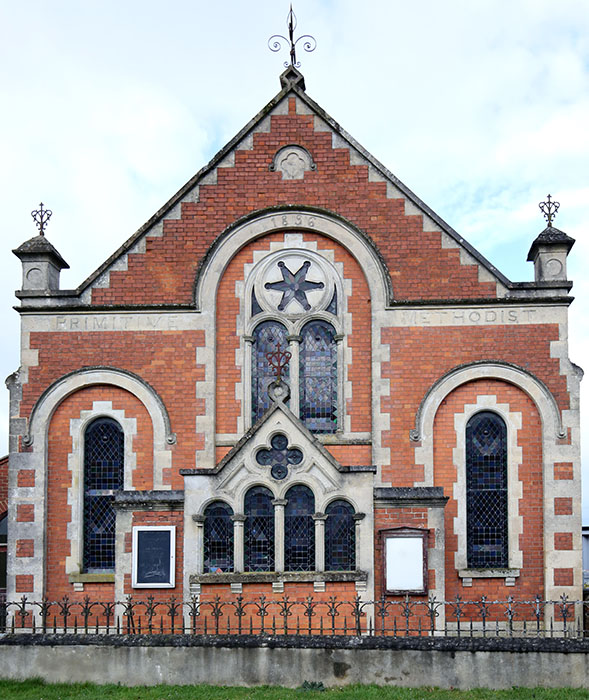 The Chapel has a very strong Italianate character, something which must have raised a few late 19th Century eyebrows in a remote village high on the edge of the Chiltern Hills. 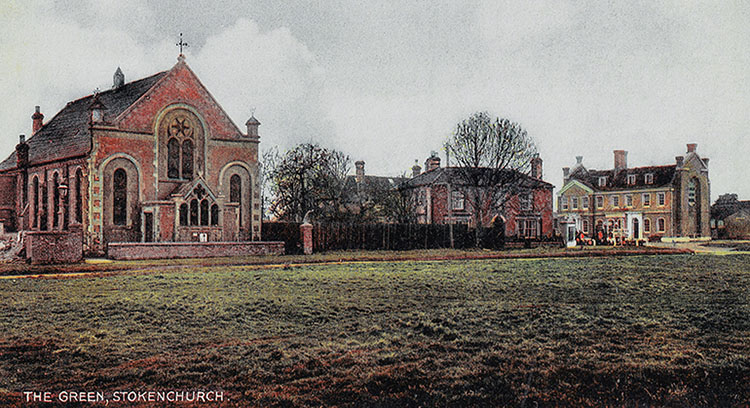 This postcard view from the early 20th Century shows the Methodist Chapel, a house and the grand King's Arms Hotel. The Hotel is now the most prominent reminder of the importance of Stokenchurch's position, on the road between London and Oxford.

The newspaper report continued: The building, which presents an an imposing appearance, is built of red brick with a lavish display of stone dressing. The entrance is on either side of the porch which leads into the main building. Inside the chapel has a beautiful appearance, the whole building being spanned by a lofty trussed roof, the principal timbers forming a semi-circle resting on stone corbels.

Here I would like to show how the INTERIOR of the Chapel looked during any of the 123 years that it was in use.

However, I am not aware of any such images.

I would be extremely grateful to receive any images that I could display here.

80 years after the Chapel opened, it was given a false ceiling which hides the roof and its timbers. So all I can show you is the way it looked when empty in early March 2020, after the Chapel had closed in August 2019. 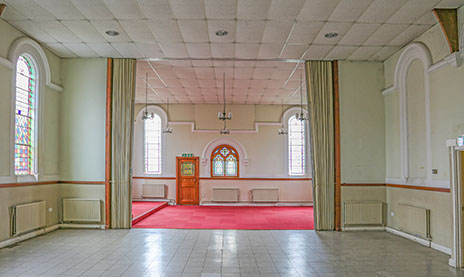 This view is looking towards the entrance front. 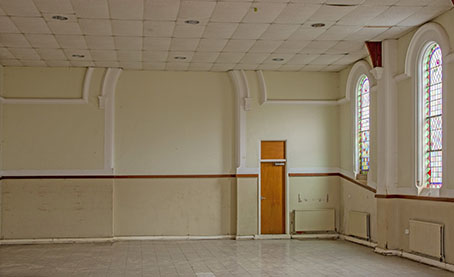 This view is looking from the entrance front.

In the 2 views above, there is glass in the windows on one side, and an opposite window has been blocked up. We can also just see the base of 2 of the original roof trusses resting on their corbels. 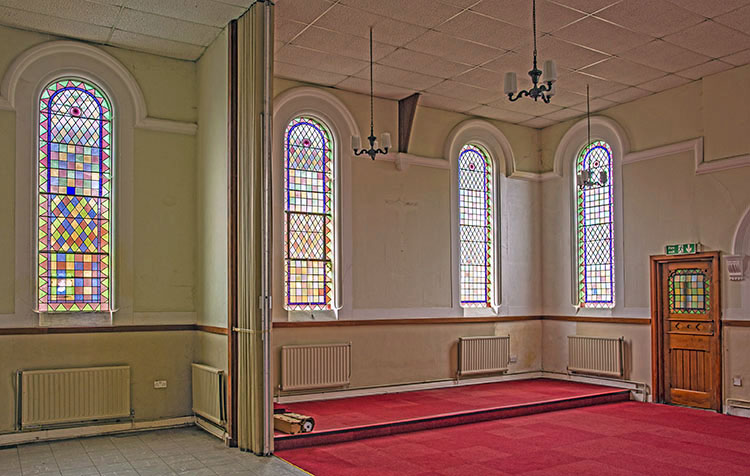 In this view, 4 of the tall round topped windows can be seen with their multi-coloured glass. So many colours could result in a rather colourful interior, but they all seem to blend together to produce a fairly natural interior light.

Below is my final interior view, where I have reconstructed the interior of the front wall to its pre-1976 look. The top of the wall is revealed, with its upper window, whose base is now boarded in, and whose top is obscured by the false ceiling. In this image I have also replaced the right-hand door from the Porch. In 1976 it had been been blocked up, and the door moved to make a new entrance in the side wall. 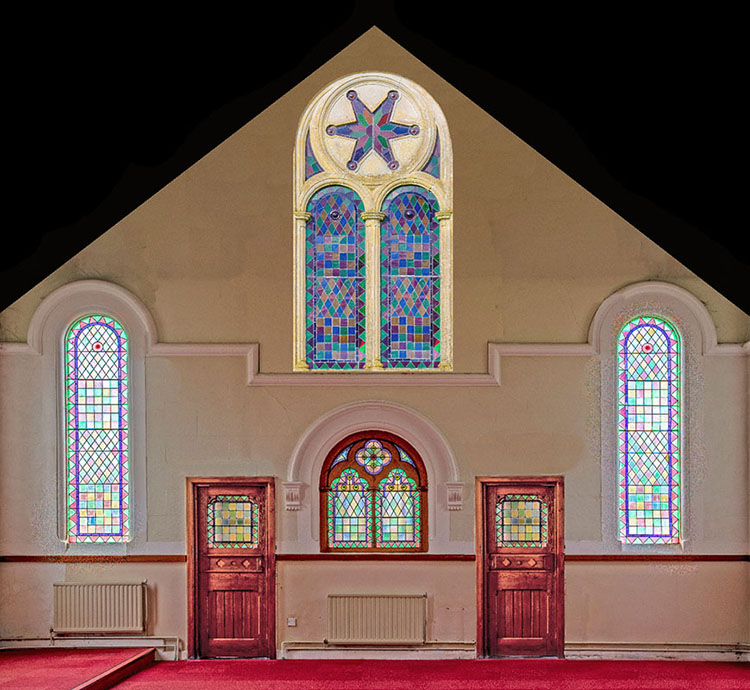 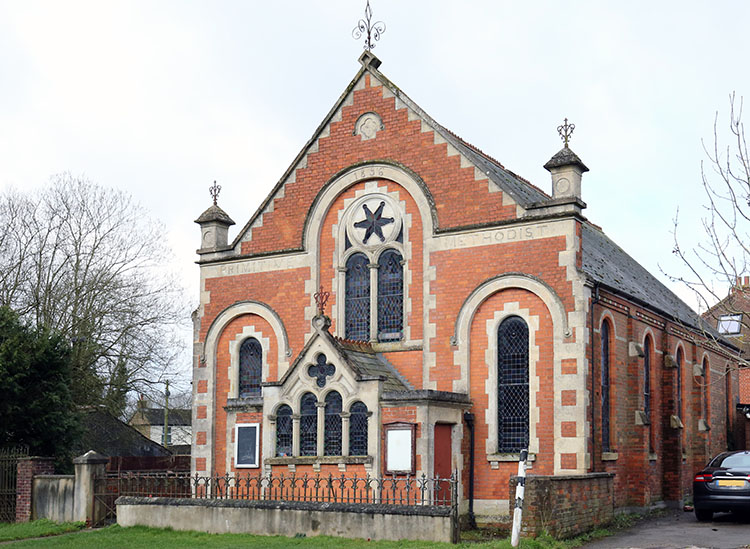 The front of the Chapel, with a view down the Right Hand Side, with its 5 tall windows. 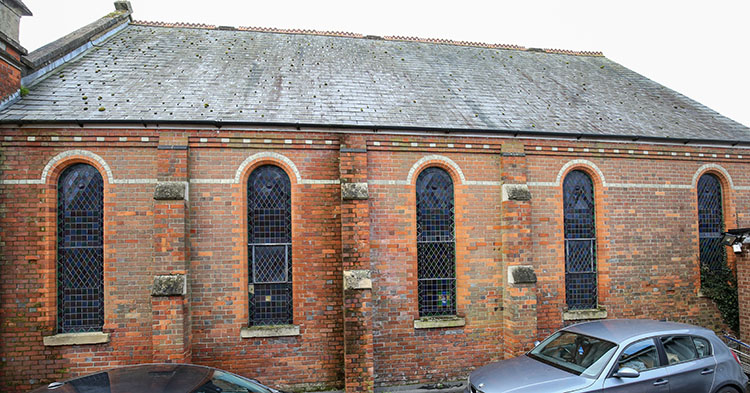 The Right Hand Side, with its 5 windows. The last window on the right is shorter, inside it is obvious that there was originally a platform at the end of the Chapel.

The Left Hand Side, which looks very different. The long roof at the back of the Chapel was the Schoolroom, obviously of some size. The lean-to roofs beside the Chapel were original on the left, nearly up to the chimney. On the right they date from 1976 - see below. 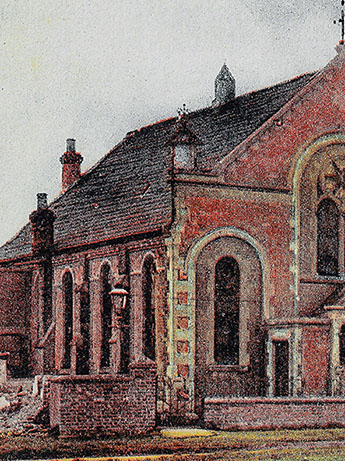 Old view with 4 windows on LH side. 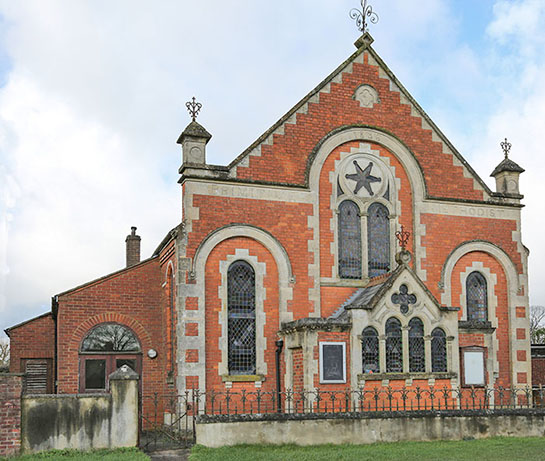 Modern view, with only one window on LH side.

The views above show that 3 tall windows were blocked up when the side Corridor was added in 1976.


Go up page to INDEX

The Porch which had a door on each side, leading to the two interior doors into the Chapel. 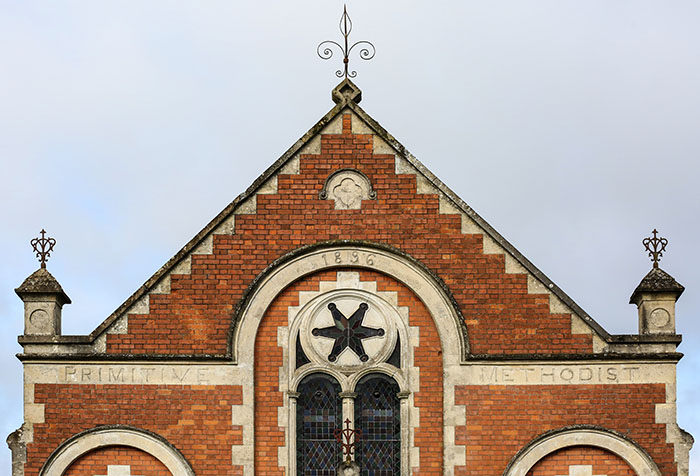 The top of the Chapel front with its decorative metalwork features.

The Chapel's Architect is usually said to be Mr Thomas Colborne of Swindon (sometimes spelt Colbourne). He was certainly a prolific house builder in and around Swindon, and I have found 4 Methodist Churches in which he was involved. 2 were in Wiltshire, and 2 in Buckinghamshire. They are all shown below. 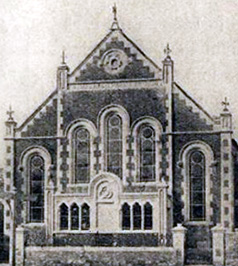 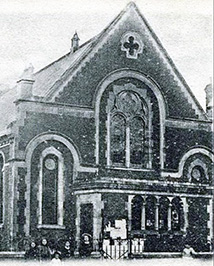 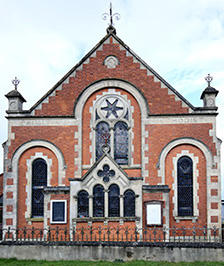 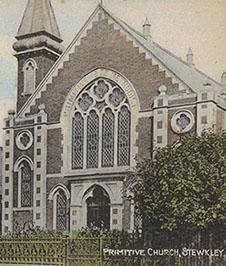 Firstly, built in 1883 was Stratton Audley where Thomas Colborne built to the design of the Architect William Drew. The wide Porch with 6 windows was a later addition, to replace a smaller one.

Secondly, and 8 years later in 1891, Thomas Colborne built a Chapel at Gore Hill in Swindon, to his own design, under the supervision of the Architect Robert James Beswick. The Swindon Chapel has now been demolished to be replaced by a pair of shops.

Thirdly, after another 5 years, Stokenchurch Chapel was built in 1896. I have already said (above) that the builder was a local man George Syred. Colbourne is often said to have been the Architect, but I would suggest that Colborne was again the Designer, rather than the Architect. Whether he still needed to be supervised by an Architect, I cannot say.

Fourthly and again in Buckinghamshire, but 7 years later, is the Church at Stewkley. At the very least, it was certainly designed by Thomas Colborne. It now has a large Porch, but originally just had a door, as shown above.

Hopefully what is obvious is the great similarity in all these 4 buildings, with their brickwork and very prominent dressings in ashlar stonework. In particular, the Swindon and Stokenchurch Chapels are virtually identical, apart from the front windows of their Porches. We can see how Colborne copied the work of others, and then adapted it into his own designs, culminating with a large Decorated style window at Stewkley.

The changes made to the Chapel in 1976 were because of a dwindling congregation, for whom the Chapel was then too large. The interior was split into two with a folding screen, so the smaller front part could continue in use as a Chapel, and the larger rear part could be used as a meeting hall for other community activities. This was enabled by making the new entrance and corridor on the left hand side of the Chapel, which re-opened in 1977.

However, after another 40 years, the decision was made to close the Chapel and the final service was held on 21st July 2019, after which the local Methodists planned to meet monthly in the Parish Church, with whom they have a good relationship.

I was pleased to be able to photograph the Chapel in early March 2020. By then the Chapel was due to be sold, and whilst I was there many local people asked me if I knew what was going to happen to the building. There was obviously great interest in it, and a clear wish that it should be preserved, whatever its future use turned out to be. It is in the Stokenchurch Conservation Area, but is not a listed building. 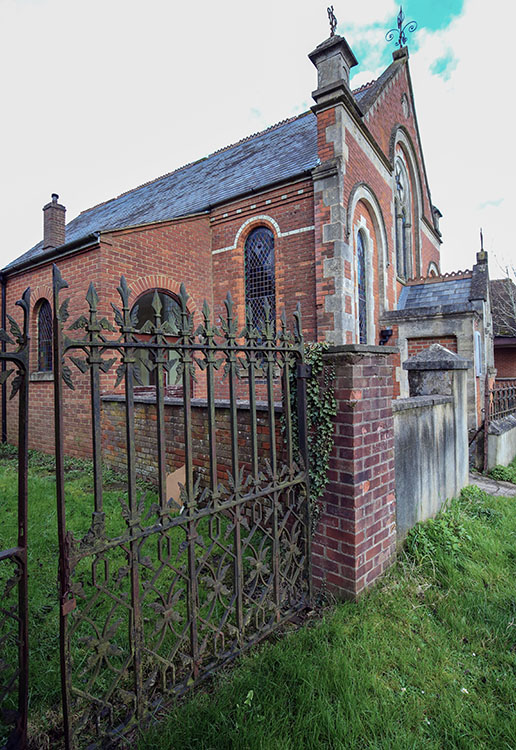 GO UP PAGE TO TOP

All photographs by Michael G Hardy unless stated otherwise